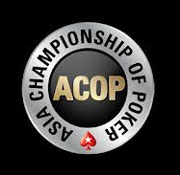 Poker can behave like a dreary Monday morning sometimes. But over in the land of the rising sun, there is a clear blue sky and the birds are in full song. There is happiness and not gloom, excitement and not dross, optimism and not pessimism.

The great thing about emerging markets is they don’t take themselves too seriously. They still know what it is like to have some fun, much like people playing Online poker games online.

The latest major tournament to take part in the East was the Asian Championship of Poker (ACOP) – held in the gambling mecca of Macau – and boy did it live up to all of its Eastern promise.

After five days of play, the final table of nine was cast in stone. When you stepped back to take a look, it was an impressive sight, with the likes of Alan Sass, Andrew Hinrichsen, and Tom Alner all taking their seats.

The final table started quickly with the short-stacked Jacques Zaicik doubling up before Xing Zhou took the chip lead after eliminating Michael Kanaan. It was a vital elimination for Zhou, who never looked back after taking the top spot.

It was fitting that the heads-up action fell between two local players. It was Xing Zhou of China versus Ying Kit Chan of Hong Kong and a six-hour marathon.

You can find out more about which cookies we are using or switch them off in settings.

This website uses cookies so that we can provide you with the best user experience possible. Cookie information is stored in your browser and performs functions such as recognising you when you return to our website and helping our team to understand which sections of the website you find most interesting and useful.

Strictly Necessary Cookie should be enabled at all times so that we can save your preferences for cookie settings.

If you disable this cookie, we will not be able to save your preferences. This means that every time you visit this website you will need to enable or disable cookies again.

This website may, from time to time, use Google Analytics to collect anonymous information such as the number of visitors to the site, and the most popular pages.

Please enable Strictly Necessary Cookies first so that we can save your preferences!